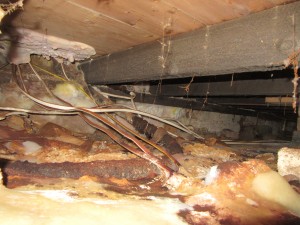 A report on our findings was sent to the client together with a quotation of costs.

During a Damp and Timber Survey, our Surveyor suspected a problem with the timber floor. Photos taken at random showed an outbreak of Dry-Rot Fungus.  (Latin name Serpula Lacryman)

Our surveyor requested to lift the carpets completely where the  fungus was noted to have spread across the floor. 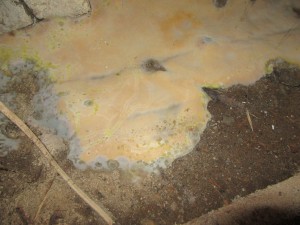 Of course any treatment wouldn’t be successful unless the cause  was established and rectified.  After carrying out an extensive inspection to determine the cause of dampness, it was found that an internal drainpipe was the culprit!

A few days later we received a call to say the client had fallen through the floor! 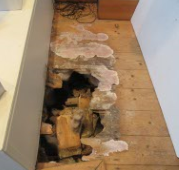 Further exposure showed the Dry-Rot was travelling along the wall meaning we had to remove the plaster to find the extent of damage.  Dry-Rot is a secretive fungus and has the ability to travel undetected behind wall plaster.  ( Note the internal drainpipe) 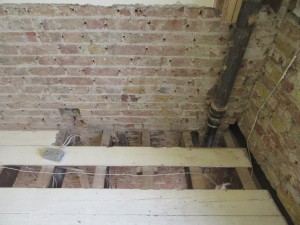 A report was compiled and sent to the customer together with a quotation of our costs.  The client agreed and work started almost immediately in order to prevent further damage from occurring. After the clients own contractors had repaired the drain-pipe, we dug up the solid floor, only to find the pipe was directed across the floor . 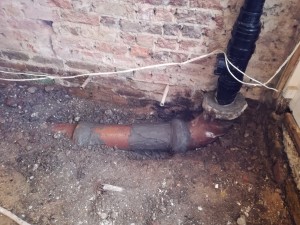 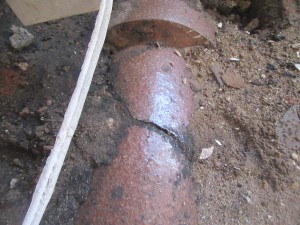 The affected timbers and solid floor were then bagged up and sealed to prevent cross contamination before being taken to our designated waste disposal site.  The wall and oversite were treated with a fungicidal solution.

The Client’s son relaid the floor and we were happy to give a long term guarantee against the re-occurrence of the Dry-Rot.